Posted on September 5, 2017 by Patrick Lester

Lurking below the bipartisan harmony on evidence-based policy is an important conflict. How much of the evidence is driven by left-leaning political agendas?

The division surfaced in interviews with prominent conservatives last year:

“A lot of the people doing these studies are perceived to be—and in fact are—left of center in their values and opinions,” said Robert Doar, the Morgridge Fellow in Poverty Studies at the American Enterprise Institute. “Conservatives are justified in being a little cautious about this because we want to make sure the researchers don’t have their thumb on the scale,” he said.

The issue has surfaced again more recently in an article for the right-leaning City Journal. In it, two conservative academics take issue with the consistent liberalism of their academic colleagues in the criminal justice field.

Evidence of the liberal tilt in criminology is widespread. Surveys show a 30:1 ratio of liberals to conservatives within the field, a spread comparable with that in other social sciences … Led by the work of Jonathan Haidt, a growing number of scholars now acknowledge that a lack of ideological diversity in the social sciences skews research in favor of leftist claims, which become the guiding principles of many fields, challenged only at the risk of harming one’s career. Liberal assumptions go unchecked and tendentious claims of evidence become fact, while countervailing evidence doesn’t get published or faces much more rigorous scrutiny than the assertions that it challenges …

Unfortunately, criminology has had a long history of suppressing evidence for expressly political reasons. For most of its history, the discipline has overtly censored research, for instance, on biological, genetic, and neurological factors that scientists have shown to be associated with antisocial traits and behavioral problems. Even today, despite lots of hard scientific evidence—such as that 50 percent of the variance in antisocial behavior is attributable to genetic factors, or neuroimaging studies that show systemic structural and functional brain differences between offenders and non-offenders—those who pursue this line of research get branded as racists or even eugenicists. We have personally experienced hostile receptions when presenting our work in these areas at professional conferences and have been excoriated in the anonymous-review process when attempting to publish our papers.

How serious and widespread is this concern? If Doar and others are to be believed, it appears substantial. And the ideological differences are not limited to academic circles.

Earlier this year, Pew published survey results showing that Republicans have become sharply more skeptical of the positive impact of colleges in the past two years. According to Pew, “58% of Republicans and Republican-leaning independents say colleges and universities have a negative effect on the way things are going in the country, while just 36% say their effect is positive.” 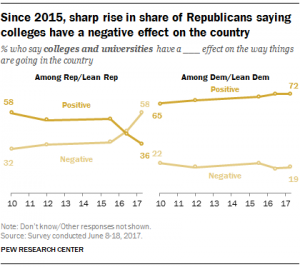 This entry was posted in Criminal Justice, Evidence. Bookmark the permalink.