The Data Quality Campaign has just released a report (and associated blog post) on the status of state efforts to address education data privacy. Since most states have part-time legislatures whose legislative sessions are over by now, the report provides a good overview of what has happened this year.

The issue has seen increased attention this year due to a controversy that erupted around the Gates-funded inBloom data warehouse project and the subsequent decision to close it down.

The controversy likely contributed to legislative activity at the state level, where student data privacy bills were introduced in 36 of the 46 states that held legislative sessions. As of August 22, 28 bills had been enacted in 20 states (see graphic below). 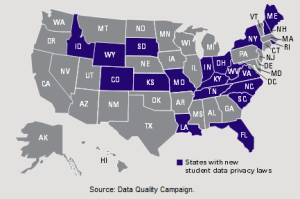 Overall, the report indicates that while a number of new protection were enacted, no state chose to defund or halt their statewide longitudinal data systems (also known as P-20 systems).

According to the report:

Overall, the report concedes that “privacy has frequently existed at the periphery of the education data use conversation and has often been seen as an issue of compliance with federal laws (namely the Family Educational Rights and Privacy Act [FERPA]) or the sole purview of IT professionals.”

It concludes by suggesting that the increased attention the issue has received has been an “opportunity to demonstrate the value of data to improve education” and “effectively safeguard data, support data governance and transparent data decisionmaking, and communicate clearly about how data are used and protected.”

This entry was posted in Data, Education. Bookmark the permalink.